Idaho officials were able to meet with Senator Risch and Representative Fulcher as well as staff from Senator Crapo and Representative Simpson’s offices. In addition to meeting with Idaho’s delegation, Idaho county officials also met with congressional staffers from Alabama, Ohio, Illinois, Texas, and Utah. In addition to Capitol Hill visits, attendees participated in a roundtable discussion with Randy Moore, Chief of the US Forest Service, and Winnie Stachelberg, Senior Advisor and Infrastructure Coordinator with the US Department of the Interior.

During meetings, participants encouraged Congress to fully fund the Payment in Lieu of Taxes (PILT) program and the Secure Rural Schools and Community Self Determination Act (SRS), stressing the need for the funding in rural counties who are unable to tax federal land because of its tax exempt status nor share in revenues generated from activity on public lands. Len Humphries shared how his county is struggling to retain deputies and the role PILT plays in funding his office. Jeff Hough and Sherry Maupin stressed the strain that is placed on counties in providing services in popular recreation areas in and around Lava Hot Springs and throughout Valley County. Idaho County Commissioner Skip Brandt discussed the impact the loss of logging has had on federal funding for schools and county roads in Idaho County.

The PILT Fly-In also provided county officials an opportunity to stress the importance of allocating Local and Tribal Consistency Funds to public lands counties. The National Association of Counties (NACo), IAC, and state associations from throughout the west submitted letters to the US Treasury encouraging them to distribute the funds as intended to public lands counties and to distribute funds using a formula similar to PILT. Timing of the fly-in was critical because of the pending September 30th deadline for US Treasury to distribute Local and Tribal Consistency Funds. Currently Congress is considering legislation to clarify which counties are eligible for a revenue share payment from the fund.

While the funding formula has not been publicized because of concern that the original bill language was not specific enough to direct the funds to public lands counties, Congress is considering legislation to clarify which counties are eligible for a revenue share payment from the fund. The clarification would ensure Local and Tribal Consistency Funds are prioritized for PILT receiving counties. Regardless of whether or not Congress enacts amendments to provide the clarification US Treasury seeks, the funds will be available to counties no later than September 30th. IAC will share new information on each county’s funding amounts as well as the timing of the payments as more information becomes available. IAC appreciates the efforts of Commissioners Brandt, Butts, Hough, and Maupin and Sheriff Humphries for taking time out of their busy schedules to travel back to Washington, DC to advocate for PILT, SRS, and distributing Local and Tribal Consistency Funds to public lands counties. 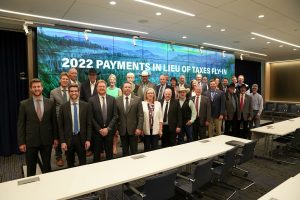