The Idaho Association of Counties (IAC) hosted its 2022 Annual Conference in Downtown Boise this September. One of the many highlights of the event was the awards presentation to honor distinguished county elected officials.

Recipients of the Mills-Adler Award for 2022:

Carrie May has lived all of her life in Idaho and pursued her dream job of being a dental assistant. She met and married the love of her life 31 years ago, and together they have four children and four beautiful grandchildren. She is an active member of The Church of Jesus Christ of Latter-Day Saints and has served faithfully with many callings, from Release Society President to Stake Primary President. Carrie took office as assessor in 2004 and has been a part of many boards and committees. She served on the Sixth District of Elected Officials Board moving through the ranks, and she was the IACA President from 2014-2015. She currently sits on the ITD County Engagement Team, the Centrally Assessed Property Committee, the Motor Vehicles/Parks and Recreation, and the Nominating committee. She is currently the IACA representative on the IAC Board of Directors. 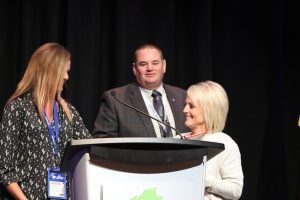 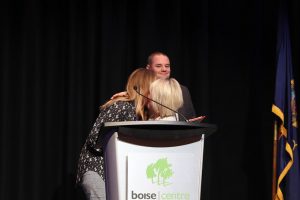 Kim was born and raised in Idaho. When she married her husband, they decided to move out of Idaho but chose to return in 2003 to raise their family. Before she was elected clerk, Kim stayed busy keeping books for several different businesses. She went to work for the county in the prosecuting attorney’s office in 2009 as a crime victims coordinator and as a secretary. She was elected as the county clerk in 2011. Kim currently serves on the IACRC Elections committee, has served as the IACRC President, and has served on numerous committees both in the Clerk’s organization and IAC. She is the proud grandmother of twelve grandchildren and one great-grandchild. In her spare time, she enjoys spending time outdoors with her family at their cabin in Island Park. 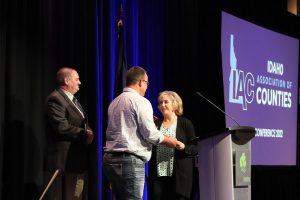 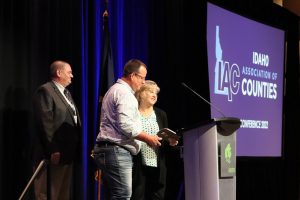 Vaughn was elected county commissioner in 2005 and has worked diligently to build relationships with other commissioners and state legislators to navigate and find solutions for issues impacting Idaho counties. He has served on the Gem Plan board since 2011 and has contributed countless hours to help keep insurance costs low for counties. In addition, he has served on the ICRMP Board of Trustees since 2019, serves as a trustee for the Idaho Association of District Boards of Health, is on the local Board of the Directors Memorial Hospital, is the commissioner liaison to the Golf, Historical Society, Shooting Range, Mosquito Abatement, TV Translator District Boards, and participates on the District 6 Juvenile Detention Board. 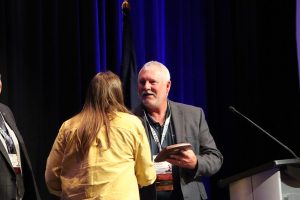 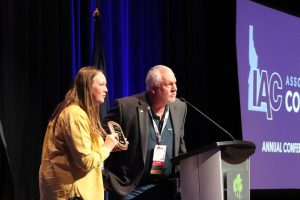 Lucky took office as coroner in 2009 and is a jack of all trades. Before being elected coroner, this individual served in the U.S. Army, was an Idaho State Police Trooper, Deputy Sheriff, EMT Safety Director, and a rancher and farmer. He has obtained his private pilot’s license, became a scuba driver, a NRA firearms instructor, an Idaho STAR motorcycle instructor, and an auctioneer. Lucky has served on the IAC Legislative committee, is the chair of the Idaho State Association of County Corners Education Committee, and had been the President of the Idaho State Association of County Coroners for the last three years. Lucky has passed on his passion for law enforcement by setting a great example for his children that they too are following in his footsteps in the law enforcement field as a dispatcher and a detective. He and his wife have been married for 38 years and have three children and nine grandchildren. His passion and dedication as the county coroner is why he was chosen to be this year’s recipient. 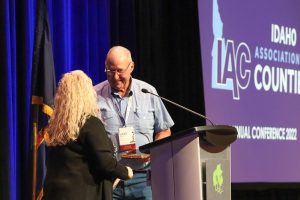 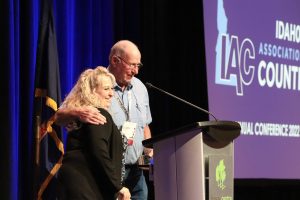 Keisha was elected county prosecuting attorney in 2011. While serving as the county prosecuting attorney, she was also the president and a board member of the Idaho Prosecuting Attorney’s Association. This prosecutor has also been the past president of the Rotary Club, PEO, the Youth Association, and board member of the county Women’s Resource Center. All of the organizations in which she held leadership positions serve the interests of her county and its citizens. Her willingness to be an active member, including leadership positions, shows her commitment to those organizations. Her efforts to educate the public on the operation of county government improved the image of county government in that the citizens had a better understanding of the laws controlling open meetings and public record requests. Better understanding in these areas improved the communications between county government and the citizens. 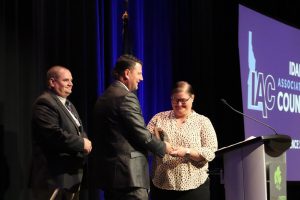 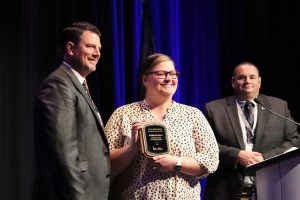 Richie served our country proudly in the United States Marines in the Security Forces for four years. He started his law enforcement career in the county sheriff’s office in 1996 where he worked for 12 years. He then went to work for the City of Troy as their chief of police. In 2016, he was elected to the position of sheriff and is currently in his second four-year term. He is currently serving as the ISA president after being elected by his peer sheriffs to the Idaho Sheriffs’ Association Executive Board. Richie received the Spirit of Idaho Award, presented by Senator Mike Crapo, for his dedication to his community. Senator Crapo stated, “I presented this sheriff with the Spirit of Idaho Award because his selflessness and commitment to his community has gone above and beyond his call of duty. Idaho—and this community—are lucky to have such a caring and dedicated person. His actions have demonstrated what it means to truly serve others.” 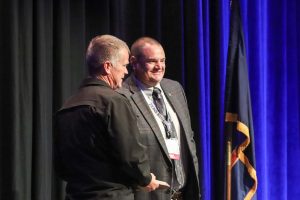 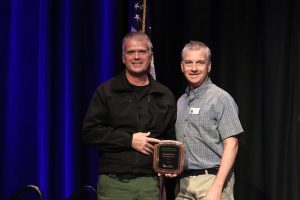 Mark was born in Germany in 1956 while his parents were traveling abroad but soon found himself on the family’s farm located in Osgood, Idaho. For the majority of his early life, he was raised on the family’s farm and attended to the many duties and responsibilities that come with a farming and ranching lifestyle. After high school, he served as a missionary for their church in the country of Austria where he became fluent in German. Mark attended Ricks College and Brigham Young University earning a bachelor’s degree in Accounting and went to work for Kingston Company. He worked many years in the banking industry which prepared him well for public service. In 1998, he was elected the county treasurer which started his career as a public servant. During his time as the county treasurer, he conducted a significant review and revamp of the county investment portfolio which has benefited the county in big ways. He supported a significant software upgrade to the county’s financial software and aided in moving the treasurer’s office to the new location in 2019. 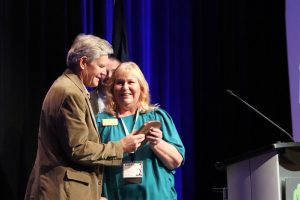 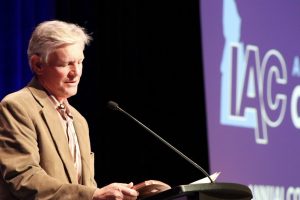 The recipient of the H. Sydney Duncombe Award for Excellence in County Government is Keisha Oxendine, First District Magistrate Judge.

This individual has served as a prosecuting attorney, as well as the president and a board member with the Idaho Prosecuting Attorney’s Association. While serving as prosecuting attorney, this individual held public trainings regarding Idaho’s Open Meeting Laws and Public Record Requests for the general public. These trainings helped educate and dispel misperceptions about elected officials’ responsibilities and provided a better understanding of the processes used by local government entities in those areas.

She supported the implementation of an internship program within the prosecuting attorney’s office for local high school students.  This opportunity provided valuable information regarding the court process to a number of high school students. Also, during her time as prosecuting attorney, she initiated a process of bringing together both city and county officials for collaborative trainings on the effective operation of local government in order to provide consistency and uniformity.

Collaborative trainings involving city and county officials can be difficult to accomplish. It involves the cooperation of officials that may, at times, have conflicting goals and perspectives.  Bringing them together requires political savvy, patience, and a desire to accomplish improved working relationships and common goals. It’s more than just coordinating schedules, and this individual’s credibility and people skills played a major role in the success of these trainings.

One commissioner described Keisha as: “I’ve know her for over five years in my time as a county commissioner. She is one of the nicest and most impressive people I know. Living in a small town you get to meet many people, and I can say myself, my wife, and my family all think Keisha is very deserving of this award.”

Other prosecuting attorneys agree with these sentiments. Especially, those who have worked with this individual on issues of interest.  “Keisha is a leader. She was an effective prosecutor, and I trusted her inherently to handle conflict cases. She was always professional and kind in her interactions, and she provided excellent representation for her constituents. It was no surprise that she was chosen to be a Magistrate Judge based on her work for Shoshone County,” said Kootenai County Prosecuting Attorney Barry McHugh. 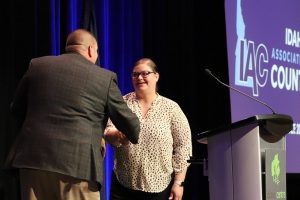 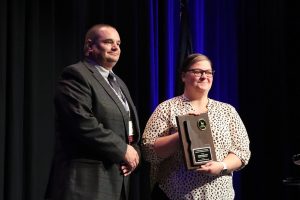 IAC was honored to acknowledge these exemplary individuals and highlight their many achievements and service to counties.