From the Executive Director: Week of February 14

As we enter the sixth week of the 2022 Legislative Session, the number of introduced bills has increased significantly. In spite of these increases, very few bills have advanced having an impact on counties. The chart below is a good comparison of recent bill introduction history through the first five weeks of the legislative session. 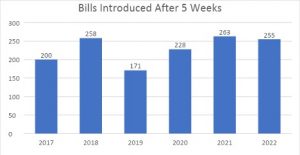 What is significant about 2022 is the fact that the deadline to introduce bills in non-privileged committees is February 14. The target date to complete budget hearings is also quickly approaching. Combine that with upcoming filing deadlines, and we are likely to see the legislature enter the frantic final month of the session earlier than in previous years.

Amidst the push to adjourn in the next month, there are two large policy issues looming over counties:

Early in the session, IAC advocated for the creation of regional public defense districts at the judicial district level. Governance would be at a regional level with funding provided by the state. Up until a week ago, I believed we were making good progress toward a regional public defense model; however, over the last week, the discussion pivoted in an unexpected way. Legislators and staff from the Governor’s Office have been working on a framework to establish a state-based public defense system funded through online sales tax collections.

The details of such a system are still being worked out. Once IAC is in a position to share the framework, we will be sure to circulate it to allow the membership to review and provide comment as IAC staff work with the IAC Legislative Committee on a path forward.

On the property tax front, a group of House members and Senators are working on a framework to exempt owner occupied residential property receiving the homestead exemption from paying most property taxes. Under the framework, the state sales tax would be increased from 6% to 7.75%, with the increased 1.75% dedicated by statute as property tax replacement for exempted owner-occupied properties. As part of the concept, a homeowner would no longer pay property taxes to non-school taxing districts except for voter-approved bonds. Homeowners would continue paying property taxes to school districts as the sales tax increase would not be enough to replace school district levies and bonds.

Revenue from the sales tax increase would be allocated to all eligible taxing districts. Each taxing district would receive a base budget amount equal to the taxes exempted plus 3% annual growth. Annual sales tax collections above 3% would be distributed to all taxing districts in proportion to the number of homestead exemptions granted in each taxing district. The concept also includes a property tax relief stabilization fund to provide a revenue cushion in times of economic duress. Owners of non-owner occupied residential housing as well as owners of agriculture, commercial, industrial, mining, and timber property.

The concept is currently in the development stages. I anticipate a draft will be available for circulation within the next week. Once available, IAC will circulate any drafts of the proposal to the membership for analysis and feedback.